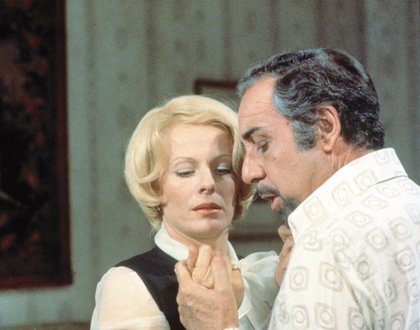 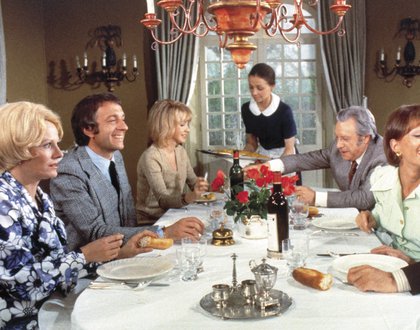 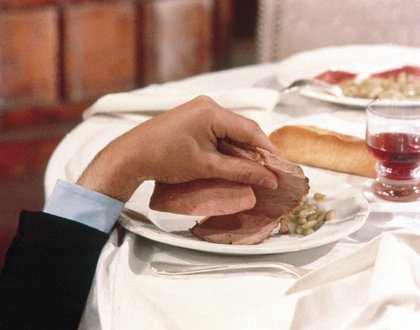 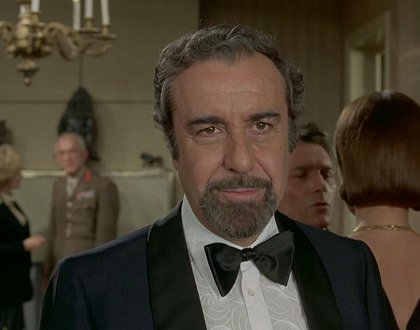 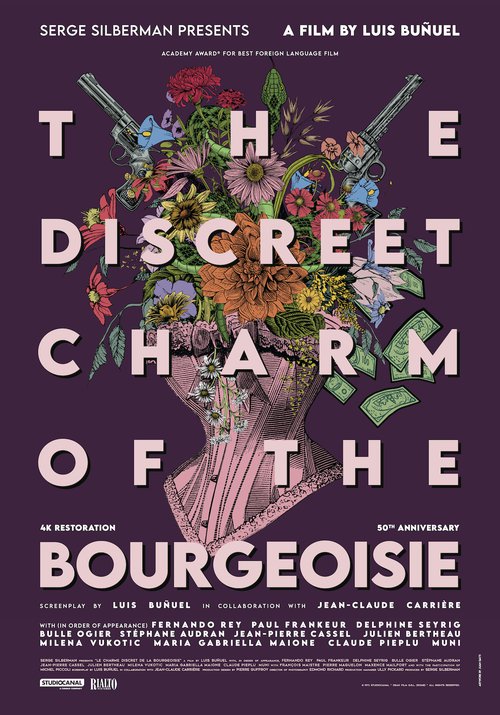 "Combines a masterful command of the medium with a mischievous, anarchic sense of imaginative freedom."
—A.O. Scott, The New York Times

"Most of the films of Luis Buñuel are comedies in one way or another, but he doesn't go for gags and punch lines; his comedy is more like a dig in the ribs, sly and painful."
—Roger Ebert, Chicago Sun-Times

Rafael Acosta, Ambassador of the South American Republic of Miranda, arrives with M. and Mme. Thévenot and the latter's younger sister Florence to dine at the home of M. and Mme Sénéchal (the three men enjoy a profitable association, smuggling heroin in the diplomatic pouch). Learning from Mme. Sénéchal that her husband is out and that they have arrived a day early, the party repair to a nearby restaurant but are deterred from eating the meal they have ordered by the corpse of the proprietor, laid out in the next room. Accepting a subsequent invitation from the Sénéchals (who have now acquired a worker- bishop as gardener), they deduce from the absence of their hosts (who have actually just slipped out to make love on the grounds) that a police raid is imminent and speedily depart. Their further attempts to eat together are equally abortive. The tearoom where the ladies meet has temporarily run out of all refreshments, while the Sénéchals’ next dinner party is interrupted during the hors d'oeuvre by the premature arrival of an army battalion for war games; the Colonel invites them all to dinner at his house the following week. The Colonel's dinner, as M. Sénéchal dreams of it, is set on the stage of a theater above a jeering audience; in M. Thévenot's sleep, it becomes a diplomatic reception at which the Ambassador, sensitive to political insult, shoots his host. At another lunch in the Sénéchals’ house, the group is arrested and jailed for dope smuggling. Released upon the intervention the Minister of the Interior, they assemble for yet another meal and reach the meat course before being machine-gunned by terrorists — upon which the Ambassador awakens with a start, then slips into the kitchen to raid the refrigerator. There is, however, reason to suppose our six charmingly discreet bourgeois will stride on towards yet another tantalizing repast.

The Discreet Charm of the Bourgeoisie won the Academy Award for Best Foreign Language Film, and BAFTA Awards for Best Actress (Stéphane Audran) and Best Original Screenplay (Buñuel, Jean-Claude Carrière). The 4K restoration was produced by Studiocanal in 2022 with the support of the CNC (Centre National du Cinéma et de l’Image Animée). The original 35mm negative was scanned in 4K and scratches, physical deteriorations, and dust have been erased frame by frame.